large Art Deco Jardinière designed by Edgar Brandt circa 1920 for the Hotel Frugès in Bordeaux, France

The Hotel Frugès is a large town house built in 1878 in the Saint-Seurin district of Bordeaux. The industrialist Henry Frugès bought it in 1912 and decided to rejuvenate it to use as his residence, he wanted to create a mirror of the arts and techniques of the early twentieth century.

The work was carried out between 1913 and 1927, designed and supervised by architect Pierre Ferret. Many renowned artists and artisans from Bordeaux and Paris participated in the fixtures and furnishings, such as Gaston Schnegg, Robert Wlérick, Jean Dupas, René Buthaud, Jean Dunand, Lucien Cazieux, Daum & Freres, Edgar Brandt, Rene Lalique, Émile Brunet … The building showcased the Eclectic tastes of Henry Frugès and presents a bold synthesis of Art Nouveau and Art Deco styles.

This Jardinière, made from wrought iron, brass and copper is a great example of this transitional style that evolved in France during the 1920’s 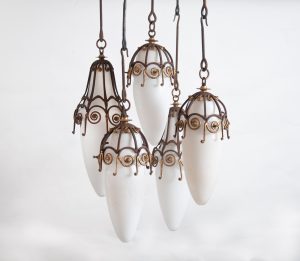