It was at the early age of 5 when Woodward took his first creative steps in the studio. The studio in question belonged to his grandfather, the cubist-influenced, abstract painter, sculptor and all-round character, Arthur Lumb. Long hours were spent in his company, surrounded by Lumb’s large abstract canvases and life-sized wooden nudes. The artist generously encouraged his grandchildren, from an early age to get their hands dirty, hammering and carving wood, daubing paint on canvas. The smell of artist’s oil paint, to this day, takes Woodward  back to his early experiences in his grandfathers studio, a unique creative environment, a treasured memory from his childhood.

From the age of 11 Woodward attended The Blue Coat School in Sonning, where he accomplished little by way of academic achievement, yet surprised all, including himself, to pass top of his year in art. After leaving school at 16 he went on to engineering college, however, it quickly became clear that this was a direction that he was not destined to follow.  It wasn’t until his late teens that the possibility of pursuing a career in art finally presented itself and his real introduction to the creative process began.

From his initial encounter with still life painting at art school in the 1980’s to the present day, depiction of objects, nature mort, has become the dominant theme in Woodward’s work. Initially preoccupied with the painstaking reproduction of nature, early still life paintings strove to mimic the techniques of the old masters. Subjects included fruit, vegetables, shells and birds. In his early twenties at art college in the United States  he studied under many established artists, including Sidney Goodman, Bruce Samuelson,  Jack Beal & Peter Paone. Graduating in 1987, Woodward won the Ware travelling scholarship from the Pennsylvania Academy of Fine Arts. He used the opportunity to return to Europe, headed straight to France and Italy to continue his study of oil painting.

During the 90’s, with a studio in Hambleden, 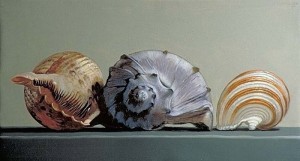 Oxfordshire, a steady stream of commissions made amassing a body of work for exhibition difficult. During this time frequent trips to the milder climes of France and Italy proved a fertile environment for the production of new pictures. Frequently he would return to England, often in his 1950’s Citroen H van, stuffed full of canvasses, antique junk, salami, cheese & olives.  Paintings were sold, the proceeds put toward a new voyage, escaping the grey skies of England, heading back toward the sunshine to paint a new series of pictures. In the mid nineties an impasse was reached, the repetitive nature of painting to order became too routine, experimentation had ceased, a change was needed.

Woodward’s entry into the world of antiques was originally an exercise in making money to fund a new painting trip to Italy. This detour into antiques and restoration, soon turned into an addiction to rival painting. Eager for knowledge, a whole new world of visual stimulus presented itself, the decorative arts of eighteenth century England, France and Italy proved themselves to be inspirational aids in developing Woodward’s aesthetic sense. It was a  revelation to him that a piece of furniture and an oil painting  could share similar measures of creativity, this discovery opened his eyes to the importance of the applied arts and its close relationship to painting and sculpture.

By the late nineties, Woodward acquired a studio in Provence, spending summers in the hills above Saint Tropez in the small Provençal village of La Garde Freinet. Regular trips to flea markets provided interesting antique finds and a steady supply of vintage frames destined to be filled with pictures. The museums of Provence provided new inspiration. The affects of his exposure to the art and applied arts of La Belle Époque can be found in his later transfer printed panels based on vintage postcards of the Côté d’Azur. The use of recycled French picture frames and the matte dusty surface of his current work with vessels, are also a result of this influence. 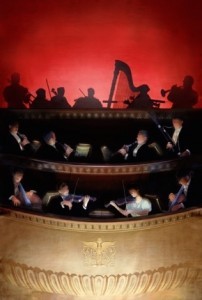 The early 00’s were filled with lucrative commercial commission work which required, due to scale, a transition from oil painting to acrylic, a technique that has endured as Woodward’s medium of choice.

After 30 years of experimentation in technique and direction, his current work is the culmination of many things. An ongoing fascination with the weathered art of Pompeii, the antique, continued exploration of the still life genre and a growing desire to simplify his output, using flat areas of colour, simple forms which highlight the importance of the negative spaces in between. Woodward’s arrangements of vessels, depicted 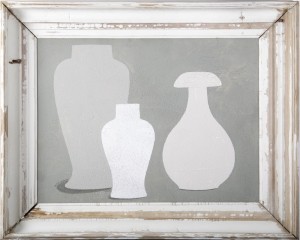 principally in flat, neutral tones are primarily exercises in form and texture. Antique and vintage frames are sourced, wooden panels prepared, coated with a mixture of gessoes, stone and pumice powder. A preparatory drawing, often using vessel shapes from memory, is first worked up on paper then transferred to the surface of the panel. Layers of acrylic paint are painted, scraped and scrubbed until the desired effect is achieved. The old frames are often treated, glazed & distressed and become as much a part of the whole as the painting itself.

Woodward currently produces between 15 – 30 paintings per year, he is currently experimenting with more still life, 3dimensional pieces and cutout works on paper.

Mid 80’s • Abandoned an attempt at engineering college in the UK and moved to Philadelphia, USA to pursue a Fine Arts degree. Primary motivation: Photo/Film. Subsequently fell in love with making art, specifically painting and printmaking.

Late 80’s • After finishing art college & leaving the United States, spent the next ten years  experimenting with landscape, still life and portraiture. Sold almost all output both privately and on commission.

2002 – 2008 •  Experimentation with digital media, printing large format on paper, canvas & ceramic. During this period (2006) commissioned to create 80 Square meters of mural in transfer print on ceramic for a wellness club/spa Rejuve at Heathrow airport Terminal 1.

2008 • Commissioned to paint/print 24 pictures for a 67 meter private yacht using early Roman and Greek themes. Experimented with various gessoes and acrylic gels for the project to create a durable surface that mimics fresco.

2010 • Supplied and installed 5 murals from the Garden foyer series for Evgeny Lebedev’s Palazzo Terranova luxury hotel in Umbria Italy along with trompe l’oeil frames for the hotel’s Limonaia.
2012 – present • Returned to primarily producing still life paintings, combining the fresco technique developed for the early Roman & Greek pictures in 2010 with formal arrangements of Pots/Vases/Vessels.