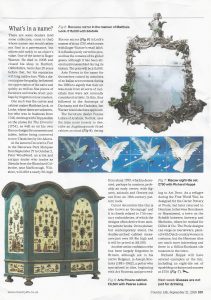 There are some dealers (and some collectors, come to that)
whose names one would rather not find in a provenance, but
others add vastly to an object’s value. One of the latter is Roger
Warner. He died in 2008 and closed his shop in Burford,
Oxfordshire, more than 20 years before that, but his reputation
will long outlive him. With a discerning eye for quality, he fostered
the appreciation of the naive and quirky as well as ﬁne pieces of
furniture and works of art, perhaps by forgotten minor masters.

One such was the carver and cabinet maker Matthias Lock, or
Locke, whose dates are unknown, but who was in business from
1746, working with Chippendale on the plates for The Director
(1754), as well as on his own Rococo designs for ornaments and
tables, before being converted to neo-Classicism by the Adams.

At the autumn Decorative Fair in the Battersea Park Marquee
from September 27 to October 2, Peter Woodward, an artist and
antique dealer who trades as 3details from the Blanchard Collective,

near Marlborough, Wiltshire, will offer a nearly 6ft-high Rococo mirror

(Fig 6) in Lock’s manner of about 1750, which comes
with Roger Warner’s retail label. It is flamboyantly carved in pine,
and has the remains of its gilded gesso, although it has been alt-
ered and reassembled during its history. The price will be £15,000.